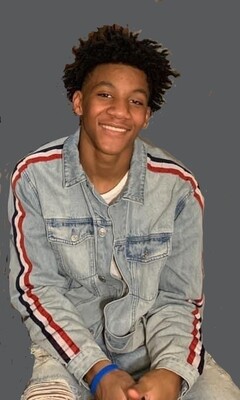 Justin found Christ at an early age as he attended Christ Universal Temple in Chicago with his family.

From a very young age, Justin was an exceptional athlete and earned numerous awards and trophies for his accomplishments. In his first season of Widget football with the Matteson Bears Football team (2010-2013), he was the starting running back, and during that same year, the team won the Widget Bowl Championship for the South Suburban League. Justin was driven by a competitive spirit and because of that drive, moved on to join the Frankfort Falcons in 2014. As a new member of the Falcon football team, he was a leading defensive back, but Justin still had a strong desire to become the starting running back before the season ended. At the conclusion of the season, Justin was responsible for a total of 14 touchdowns, and 4 extra points as a two-way player; an exceptional feat. In junior high, at St. George School of Tinley Park. Justin was voted Most Athletic. He loved football and went on to play a multitude of positions at Marian Catholic High School in Chicago Heights.

Justin valued family tremendously. He enjoyed traveling all over the world with his relatives. When at home, Justin would involve his family in household fun! He even took time to personally engage with his parents and sister about random thoughts and ideas he had. Justin was very open in that way. He was blessed with an intuitive spirit that had him in touch with the collective spirit in his home.

Justin had a heart of gold, and it reflected in his interactions with people. He would often take people under his wings, whether they were the most popular kid at school or the shyest person in the room. Justin made sure no one around him felt excluded. He made friends easily as he was very genuine. His infectious smile endeared him to children, and he always took time to interact with them at family gatherings. This made working at Sky Zone as a teenager a perfect fit for Justin. He enjoyed the responsibility of having a job, which further speaks to his work ethic and character. Even before being old enough to work, Justin possessed an entrepreneurial spirit. He would always come up with innovative ways to earn cash and save up for things he wanted to purchase. He had a charitable heart too and enjoyed giving to others.

Justin was the son every mother and father would be honored to have. He was athletic, respectful, loving and kind. To know Justin was to love him! He made everyone around him smile and laugh.

Justin was blessed to be given a Ford Mustang when he got his driver’s license. He loved that car from his parents. It gave him the independence to start his journey to manhood. In the 17 years Justin was with us, he lived his life to the fullest.

Justin’s memory will be cherished by all who knew him. He leaves to honor his beautiful life: parents Terrance and Irene Young, his sister Kayla Young, grandmothers: Ada Tate and Gloria Robinson, aunts: Lisa Robinson and Allene (Paul) Cunningham, cousins: Carlisa Johnson, Christopher T. Thompson Jr., and Christian Cunningham along with a host of relatives, friends, and teammates who loved him dearly.


To order memorial trees or send flowers to the family in memory of Justin Young, please visit our flower store.