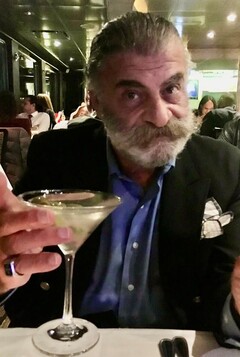 John Angelo Galea, aka Pops, Johnny, Uncle Fonz, Uncle Moustachio, and Grandpa Too...
Went home to God on Saturday December 26th 2020.
Proudly born in Zejtun, Malta, to late Joseph Galea and late Grace (Borg) Galea.
John grew up in Brooklyn, New York... with, and survived by, his four very close siblings. Horace(Beatrice)Galea, Victor(Laura)Galea, Cathie(lateTony)Gurrera, and Michael (Marianne)Galea.
Survived also by his loving daughter Jonneal Galea, her partner, Michael Flores, also her mom, Jeanette Maly.
John honorably served his country as a US Marine from 1968-1972. His heart was in both New York and Chicago where he had so much love from family... and was well known for his outstanding restaurants, partnered with brother Michael, The Munch Bucket, in Chicago, and the famous Christina’s Corner Caffé, in NYC with unparalleled pizzas and distinct desserts!!

John’s larger then life personality was always the life of the party ... but he had a special love bond (and usually a nickname for), each and every one of his great nieces and nephews: Nicholas, Rocco, Jessica, Kayleigh, Kiera, Brooke, Ashley, Tyler, Charlie P, Danielle, Kyle, Cole, Carson, Carter, Austin, Drew, Devin, Julia, Olivia-Laura, Francesco, Victoria, Victor, Charlie B, Grace, Michael, Gianna, Janis, Lil Joey, littlest Joey, Jennifer, late Jesse, Olivia-Grace, Mallory, and Gabe.
He was loved as “Pops” by Pamela Hamilton, Anna-Banana Flores and “Grandpa Too” to Sofia Gomez
And absolutely adored by his dog Curly.

We all miss the good times with him and will forever carry him in our hearts.